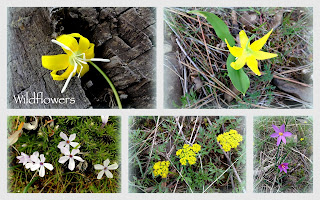 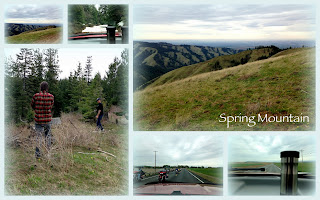 With tea thermos' filled, we headed to the mountain. The guys wanted to see if we could get to the cabin, but I was most interested in the wildflowers. After driving through miles and miles of lush, green wheat fields, we reached the mountain base and switched the truck to 4-wheel drive. The roads were dry and we were hopeful we that we could get to the top. But just a couple miles from the summit we arrived at a shady spot and found the road filled with "rotten snow". It was mushy and impossible to drive on top of. After several attempts, and a walk around the bend where deeper drifts were discovered, we decided to turn around. Instead we found a meadow and spent some time walking and looking for wildflowers. 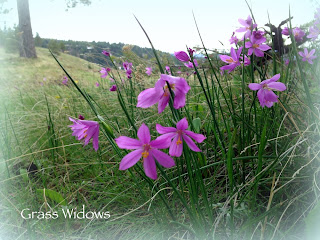 Early spring flowers are usually yellow and purple. As the season progresses, flowers of blue, red, and white become more predominate. I especially enjoy the Grass Widows. They are one of the earliest blooming flowers in our locale and are a member of the iris family. In the valley they start blooming in February. As the months progress, their appearance varies by elevation. Although we call them Grass Widows, their Latin name is Olsynium douglasii. Grass Widows grow in erect clumps of grass-like leaves with round stems that hold the blossom. The flowers are a bright reddish purple (although they do grow white is some locations) with bold yellow centers. They like rocky, moist places to grow.

The name Grass Widow dates from an expression of 16th century England. It's a term that was applied to unmarried women or to a woman whose husband was temporarily away from her. There is much speculation as to how this term came to be applied to this flower. It may be that the term was applied to the earliest pioneers of the west who enjoyed a tryst in lush fields of this flower in early spring. Or is could be that the flowers were named for explorers and trappers who developed romantic relationships with Native American women they met on their journey through the west. 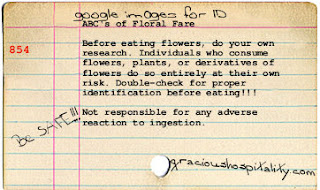 The Grass Widow is listed as non-toxic, and therefore safe to eat. But, even the animals avoid this flower because it is not at all tasty. Instead, it would best be saved as garnish or decor for a beautiful dessert or bowl of salad greens. It has a tender blossom which doesn't travel well, so garnish for a mountainside picnic is its best use.