My mother’s favorite flower was the pansy. It was her lifelong favorite, with no deviation or change of thought. Although she loved all flowers and had a degree in botany, the humble pansy was always her favorite. As a child, I remember her showing me how each pansy had a face. And each face was unique and expressive in its own way. It seems especially meaningful to me now that she is gone that the pansy means “thought” or “remembrance”. The word itself can be traced back to the French word, pensée. The pansy is a flower with several nicknames. Each name was given because of a specific quality applied to this flower. My favorites are “Jump Up and Kiss Me” and “Heart’s Ease”. Or how about this one --- Three Faces Under a Hood”? Sometimes the pansy is called “Viola Tricolor”. Other names referenced are “Cull Me to You”, “Tickle My Fancy”, "Live in Idleness”, “Kiss Her in the Pantry”, “Johnny Jump Up”, “Monkey Faces”, “Peeping Tom”, and “Three Faces in a Hood”. So many names for one simple, little flower! 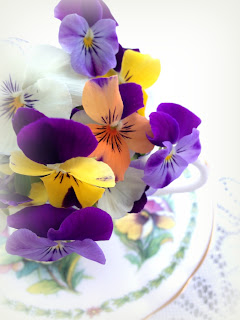 In “Language of Flowers” by Kate Greenaway, pansies are said to represent “thoughts”. In Victorian times, a maiden found a pansy that was left by an admirer, it meant that “I am thinking of our forbidden love”. It was much more romantic to let her know by giving her the flower rather than putting it in writing or saying out loud. But, the custom did not go both ways! If a lady gave a pansy to a man she admired, it was considered bad luck! Times surely have changed! 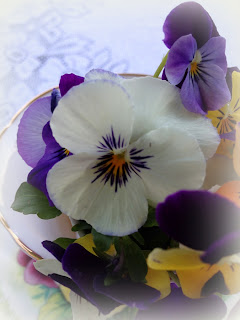 Dorothea Dix, an American nurse and activist who lived in the Civil War era seemed to admire the pansy too. She said that “perhaps no flower...claims to be so universal a favorite, as the viola tricolor; none currently has been honored with so rich a variety of names, at once expressive of grace, delicacy and tenderness.”

Another famous American was Clyde Tombaugh. He was an astronomer who made discoveries in our solar system. But clearly he didn't always look up. It appears that he also took time to appreciate little things close to the ground, like pansies. He is famous for asking "how does a pansy, for example, select the ingredients from soil to get the right colors for the flower? Now there's a great miracle. I think there's a supreme power behind all of this. I see it in nature". 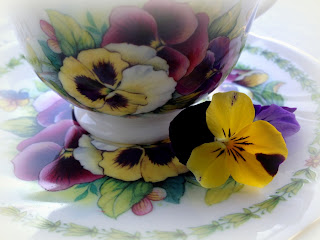 The pansy is an edible plant. Both the blossoms and the leaves are safe to eat. References in the past show that the leaves were used by the Celts to make tea (actually a tisane, which they used as a love potion) and Culpeper, a 17th century English writer, refers to a syrup made from the flowers that was used medicinally to cure certain unsavory diseases.

The pansy is the subject of legend and lore in every culture where this pretty flower blooms. I especially enjoyed learning what American pioneers thought of this flower. They felt that if they picked a handful of these flowers in the spring and brought them into the farmhouse, prosperity would ensue. If the custom was neglected, harm would come to their baby chicks and ducklings. Pioneer children made dolls out of the pansy blossom. Using the pansy flower for the faces, they would add leaf skirts and twigs for arms and legs. So beautifully inventive!