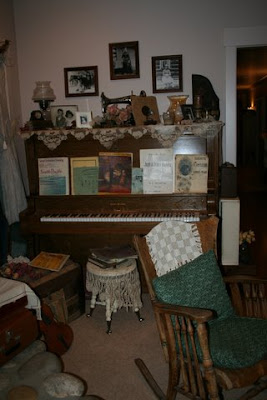 Each family has their treasures, and I've come to the conclusion that those most cherished are those items that provide interaction with the family who owns them. How many families do you know that place high value upon a piano, a sewing machine, or a rocking chair? These items provide hours of playing and listening pleasure, the ability to create, and time spent rocking a baby. Terri has graciously allowed me the privilege of telling you about their family treasure: a beloved piano. Her sister, Paula, has shared stories and details about this beautiful piece as well. 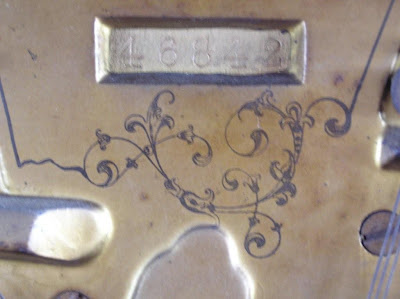 But first, let me set the stage by telling you about an interview I watched on Good Morning America yesterday. Cloris Leachman was being interviewed, and she ended the interview by sitting down at a piano and playing a medley of beautiful classical pieces. She has such humor, and it just spilled out of her.

As she started one lovely classical piece she said:
"I used to light the candles on the piano and play this song when I was eight --- and everyone else was doing the dishes."

I remember those days, although it never worked with my mom! I asked Paula if it worked for her. Her response was interesting in that she was born a twin. Her sister, Penny, and she would take turns doing dishes, and the other one would practice the piano. Then she said:

"Thank goodness, I'm second to youngest and didn't have to do dishes for seven kids. Terri got that honor, being the oldest!" 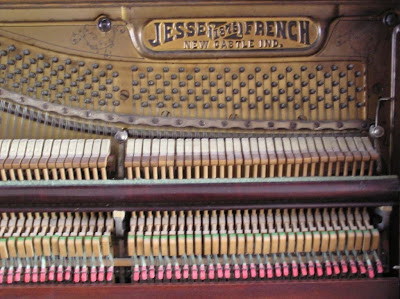 Their family piano has a rich and interesting history. The information on the manufacturers label reads "New Castle Indiana 1875 Jesse French". They believe their piano was made about 1923. Formerly owned by the pastor of Terri's and Paula's family, it was given to their parents in 1964 when the pastor and his wife moved and were unable to take it with them. Later, when their family moved to a new town, the piano went with them, carried on the back of a flat bed truck. It seems this was only the first of several flat bed truck rides the piano took, sometimes traveling to another state and over many miles. It was on this piano that many of the children and grandchildren in their family learned to play. Gifted with the ability to play be ear enhanced this quality. The place of honor in the family that was placed upon this cherished family heirloom is illustrated by the tender loving care it has been given. Terri and her husband restored the piano, having it tuned, the keys restored, and refinishing it to its original beauty. A house fire later required it be professionally restored. But it's beauty and charm still shine through.

Paula expressed the family sentiments and memories very well when she says:

"So it's about eighty-six years old and been in our family about forty-five years. I can remember as a child listening to Terri play for hours. She never took lessons for piano but took accordion lessons for about a year and a half, so she was self-taught. She was the one who taught me a few songs. From that I learned I could play by ear. The piano is beautiful and brings back many memories to me, especially of my Dad who is no longer with us. He would always say, 'play me a song Paula', and of course I would. I could even play a little Merle Haggard whom my Dad loved!" 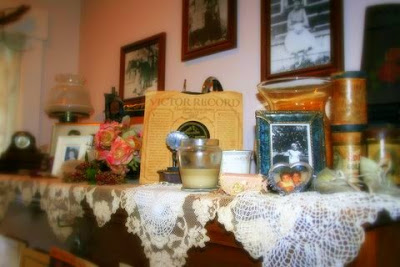 Cherished family treasures; each family has their story to share. What is your most cherished family heirloom? Is it interactive in some way? I would love to hear about your treasure; stories of pianos, sewing machines, rocking chairs, china, and more.