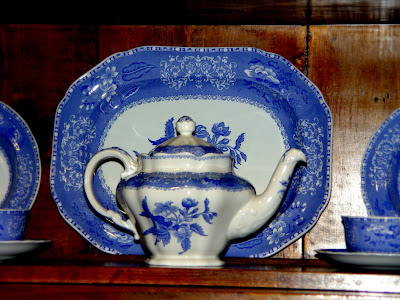 In the 1830's the Hudson Bay Company commissioned the Spode and Copeland company of Staffordshire, England to be their official supplier of china.  At many outlets throughout North American, a variety of their transfer-print designs were offered for sale to those who helped to develop the frontier.  Fort Vancouver and other sites in the Pacific Northwest show samples of some of the china pieces that have been excavated at their sites.  This beautiful teapot is on display in the museum at Whitman Mission.  Are you familiar with Dr. and Mrs. Whitman and their role as missionaries in the Pacific Northwest?   If their teapot could tell a story, I know it would have many stories of hospitality, adventure, and heartache to share.
Marcus and Narcissa Whitman were Presbyterian missionaries who settled in the Walla Walla Valley where they established a mission that gave religious instruction and medical care to the Cayuse Indians.  Narcissa was the first white woman to travel overland to the western frontier (1835).  It soon became evident that their mission was not only to the Cayuse, but to a myriad of  pioneers from wagon trains of the Oregon trail.  Often, travelers would arrived at Whitman Mission deficient in food or ill and in need of a physicians care.  The trek over the rugged Blue Mountains was arduous and being near the end of the journey, supplies and energy were often sparse.  Marcus and Narcissa would minister to these pioneers, providing not only a place for food and medicine, but a safe place to stay as they were restored to health and wellness and could find regeneration for the last part of their journey to the Willamette Valley.  For many years Marcus and Narcissa ministered to those in need.  They had a beautiful daughter whom they named Alice Clarissa.  When a little tot, she drown by the gristmill in the Walla Walla River.  She was their only child.  Frequently, Marcus would take overland journeys on horseback to the east coast, leaving Narcissa behind to tend to the needs at the mission.  She spent many lonely days and nights in waiting.  A single hilltop on the compound grounds provided a view of the mountains and distant valley, and when Narcissa thought that her husband's return might be near, she would climb the hill each day, looking to see if she could find him in the distance.  Sadly, tragedy struck in 1847 when measles affected pioneers brought their wagon trains to the mission so they could rest and receive medical care.  The disease was new and strange to the Cayuse, and soon they were infected and many died.  In retribution, they massacred Marcus, Narcissa, and others at the mission compound.  The mission buildings were burned to the ground.  The mission site is now a National Historic Site.  Many people visit each year, walking the pathway Narcissa took to the hilltop, or visiting the river edge where little Alice Clarissa drowned.  Although the buildings are gone, some foundation stones remain and outlines of the buildings have been restored.  A small cemetery on the grounds shelters these missionary pioneers and others who served on the mission grounds.
If the Whitman teapot could talk, it would have many stories to share.
Posted by La Tea Dah at 4:41 PM