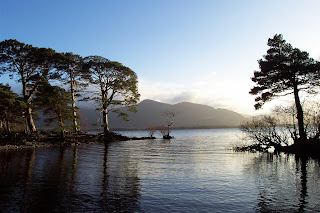 Meantime she sent her daughter-in-law (who incidentally had worked two years at Schrafft's Restaurant in New York but got homesick and came back to marry a local boy) to the neighbor's house at the end of the road for a car.  No one was home, and now we were all in a frantic frenzy.  That boat was due to leave 30 minutes before.  I threatened to walk, and finally they consented, but insisted the daughter-in-law walk the 5 or 6 miles with me.  In a few minutes, we heard a car driving up behind us, and the much-sought neighbor materialized.  We roared over ruts and believe it or not, when we arrived, the boats were just leaving, having waited over 30 minutes for me.  Mike, who was beside himself, had just told them to go on without.  He was going to start after me, spend the night in the mountains, stay with a farmer, hire a car (no more horses!) or anything that was necessary.  An interesting postscript was that the California woman's horse also took her to its house in a different direction from me, and the farmer there had to bring her back in his car also.  Well, now that it's all over, I'm glad it happened.  How else could I have taken tea in front of an open peat fire with the turkeys and the dogs and the O'Donahue's of Killarney?