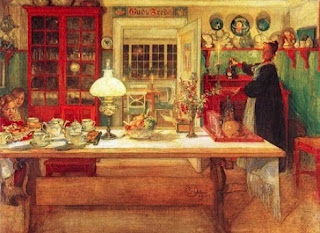 An old peasant lady appeared in black dress and stockings, and at the sight of another human being, I nearly broke down in weeping.  Struggling for control, I told her I must be lost (although I suspected that she already suspected that).  I told her the boats were leaving soon (there was only one a day), but this horse insisted on coming here.  She then dropped her little bombshell --- the horse belonged there and was merely coming home --- with an unwilling visitor!  She later admitted it was not the first time it had happened.  The horse and I had been on the trail for four solid, er, liquid hours!  She led me inside her home (which I was than anxious to see despite my distressing situation) to an open peat fireplace with an old black kettle hanging over it, and then began stripping off my soggy clothes.  I sat by the fire with this kindly soul bustling about, putting warm clothes on me, getting hot tea, trying to hurry with three huge dogs, and a red-haired Irish grand baby, and a flock of baby turkeys all under foot.  I couldn't believe my eyes and wanted to laugh and cry both, at this unreal situation.  I watched bemusedly while one little turkey jumped into the rim and then into a large pail sitting on the kitchen floor.  Hearing noise, the lady of the house rushed over to the pail in time to pull out a half-drowned little turk from what was obviously a pail of water.  Calamities!  It was a wild scene.  She shoved them all under a basket and then proceeded to cut a homemade raisin loaf for my tea without benefit of hand washing of any sort between turkeys and bread.  I may have winced, but I wouldn't have refused her hospitality for anything.  It tasted delicious and was served on her best china.  She commented that I "seemed to fit in very nicely here in this country" probably because I was petting her dogs that were running in and out, and trying strenuously to see everything I could while just trying to appear as if I had grown up with peat fires and turkeys drowning themselves in the center of the kitchen floor!  When I told her I was from California she was very surprised and said she thought I was one of the local Irish girls from "up North".  I concluded that I must be fitting in very well indeed.  My Yankee twang was mistaken for an Irish brogue...!