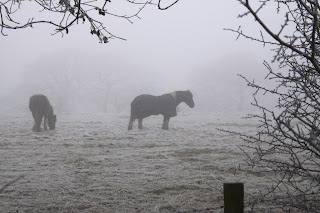 The strangest tea I will ever have in my life occurred in Ireland, which, by the way, is green, friendly, progressive, and lots of fun.  In the wild, rugged, southern Killarney Lake country, Mike and I took an all day trek, making a complete circle, first by pony cart, then by horseback, and later by boat, which circled us back to the starting point again in the evening.  Not being so lucky weather-wise in Ireland (where are all those green shamrocks?), we had rain most of the six days we were there.  This memorable day was no exception, but we wanted to take this trip badly enough to do it in the pouring rain.  We had another lady and a foolhardy couple from California with us and a little sort-of-girl-guide.  We set off in high spirits, which sank lower and lower as we got colder and wetter.  Transferring from the pony-trap after an hour, we found the horses typical nags, and cantankerous to boot!  However, I felt somewhat smug and self-assured, since I was almost raised on a horse.  After two hours on horseback and getting into deep, wild mountains, we were stiff and frozen.  Our sack lunch became a mass of mush, vitamin pills in my purse ran red all over, our clothes were sodden, and our limbs were paralyzed with cold.  Our little-girl-guide reassured us by telling us we only had three hours left to go!  We saw an isolated house that offered tea, and gratefully groaned off our horses and dripped inside, running rivulets on her kitchen floor, and apologizing between chattering teeth.  We gulped hot tea with Irish soda bread, and stayed as long as we dared.  Again, we struggled aboard our plugs, who would not do anything they did not feel like doing.

In the meantime, the country was frighteningly beautiful, with deep gullies, broad rocky valleys, and treeless craggy mountains --- what a fantastic trip in good weather!  After two more frozen hours, Mike and I approached the summit (we were ahead) and looked into desolate virgin territory beyond.  My tendency was to go left, because it look like we might meet our boats there.  But my horse was going right whether I consented or not, and trusting the sure-direction instincts of a horse, Mike and I went right.  After a while, Mike wasn't so sure, so turned his horse back to the crossroads, but mine would not go.  I kept assuming the others would come (since my horse insisted this was the right road) but, hill after hill, I kept looking back.  No horses appeared, and soon the crossroad was far behind me.  Gradually I decided this must be the wrong way, and tried again to turn around.  I tried to go into the lane of an isolated house, I tried to stop. . .I tried everything, but that broken-down horse was impossible.  When I tried to let the horse know who was in charge, he promptly backed me right down a bank into a ravine.  Then, for the first time I was frightened, because I knew that I could not handle that horse.  I began (in growing terror) to contemplate spending the night out in the wilds of Killarney and likely freezing to death.  I had no idea where we were headed, but it certainly wasn't toward human habitation.  These were very bad moments.  Spying an inhabited old cottage, I decided to stop, even if I had to leap off the horse, but surprisingly she was willing and I lumbered off, hallowing to the occupants. . .