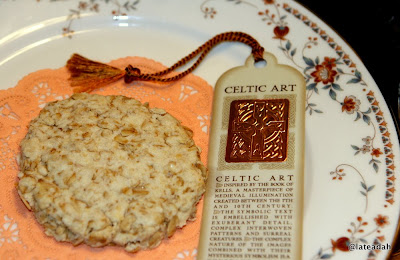 What do you eat with tea?  People usually think of toast or scones, but oatcakes are a variation of the bread theme and are delicious with jam and tea.  Traditionally they are can also be served with savory toppings and accompaniments as well.

Oatcakes made with yeast are commonly associated with North Staffordshire, Cheshire, and Derbyshire.  It was once common that oatcakes were sold from individually as housewives would market them from an open window of their home.

Scottish oatcakes vary in that they can be made from baking powder and are baked either on a griddle or on a baking sheet in a hot oven.  Scotland is known for growing oats, and since oatcakes are simple to make, they became a staple in the Scottish diet.  Soldiers in the 14th century would carry a metal baking plate and a sack of oats with them.  When hungry, it was easy for them to moisten the oats and create this quick bread as a carbohydrate staple in their diet.  Samuel Johnson once said that oats were 'a grain, which in England is generally given to horses, but in Scotland supports the people.'  Sir Walter Scott was said to retort 'yes, and where else will you see such horses and such men?'

In Scotland, oatcakes are made on a girdle or by baking rounds of oatmeal on a tray. If the rounds are large, they are then sliced into triangular shapes. Oats are one of the few grains which grow well in the north of Scotland and was, until the 20th century, the staple grain used.  Generally they are very hard and dense, although with the addition of oil or shortening, a flaky and tender cake is easy to make.  I thought I'd try my hand at it recently, and was really happy with the result!  Here's the recipe I used:
Scottish Oatcakes


Preheat an oven to 375 degrees.  In a bowl, place oats, flour, baking soda, and salt.  Using a pastry blender, cut in shortening until the dough has a fine crumb.  Add ice water, a teaspoonful at a time.  Mix until mixture resembles a stiff dough.  Roll on waxed paper to 1/8 to 1/4 inch thick.  Using a cookie cutter or a drinking glass, cut into circles.  Place on a baking stone or cookie sheet.  Bake until golden, about 15 minutes.  Serve plain with honey, butter, or jam.  Also delicious with savories like tomato slices and a cup of soup.
It is said that Queen Elizabeth II of England enjoys oatcakes with tea for her breakfast every day.  May I suggest that the addition of oatcakes to your 'afternoon tea' routine might help enhance your celebration of January as National Hot Tea Month?
*I also made oatcakes with olive oil rather than solid vegetable shortening because olive oil, being non-hydrogenated, is a much healthier.  The oatcakes turned out very well, but were very tender, so handle with care.  The rule is that shortening provides a flaky crumb and oil results a tender crumb.
**Thank you to Vicki for the beautiful Celtic bookmark!
Posted by La Tea Dah at 10:39 AM