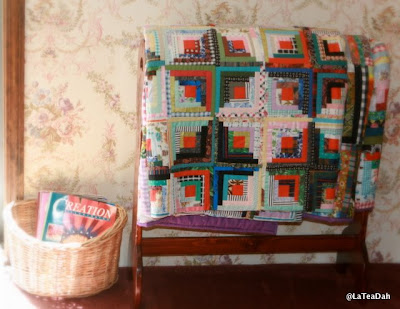 Although there are many beautiful quilt patterns, nothing pleases me more than a log cabin quilt. There is something that always draws me back to this beautiful design. Recently I was the guest in a home where not one, but two beautiful log cabin quilts were displayed in the guest room. They were stunning in a comfortable and folksy way. Americans have long considered that this pattern is purely American, but research shows that this design goes back to old England and even before to ancient Egypt. In the early 19th Century, many tombs in Egypt were opened and thousands of small animal mummies were found --- wrapped in strips of linen with the Log Cabin design pattern on them. I wonder what the Egyptians called this design? For sure, it wasn't 'log cabin'! The resurgence of this design in Early American history illustrates that red centers are traditional and common as the center of each log cabin square. Each red square represents a glowing, warm hearth. The light values on one side represent the sunny side of the house, the dark values represent the shady side. Many quilts in this design were stitched in the early 19th Century when pioneers were heading west after the Civil War period. It really is a 'little-house-on-the-prairie' design! I've stitched a log cabin quilt for my family, and I have enjoyed observing those of others over the years. The oldest I've enjoyed is one I found on display at an old fort from the Civil War era. And yes, the centers were the traditional red, made in wool, and the light and dark strips were constructed of uniforms of army soldiers. What a historic piece it represents and what a story it tells. Is there a log cabin quilt in your personal history?
Posted by La Tea Dah at 12:55 PM