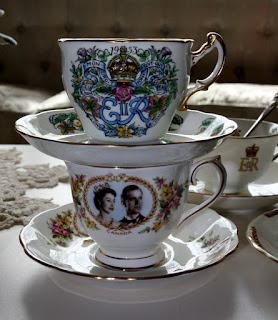 Queen Elizabeth II was of my mother's generation.  As a loyal Canadian, mother had a fondness for English royalty and especially for the Queen.  Mother was proud that a young woman near her age was crowned Queen of the British Empire.  Throughout her life she retained this affection and followed happenings of the Queen throughout her life. 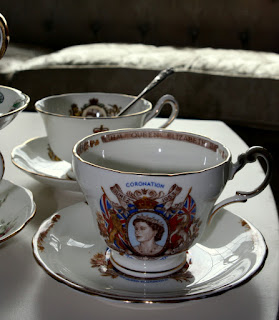 While on the subject of royalty, I thought I would share the rest of my collection of English commemorative tea ware.  These are teacups and saucers that commemorate the Queen's coronation and a trip to Canada a short time thereafter. 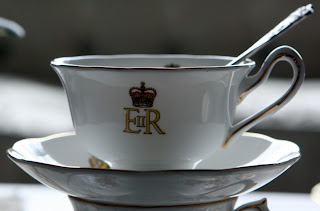 This simple teacup and saucer commemorate the coronation of Queen Elizabeth II.  The outside has her royal cypher.  Inside the teacup is her picture surrounded by a royal lion and unicorn.  It is Royal Albert Bone China, England. 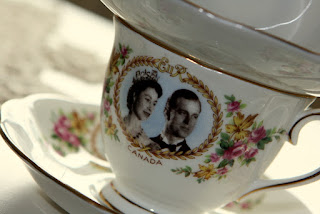 This teacup was created to commemorate a trip that Queen Elizabeth II and Prince Phillip made to Canada.  On the base it says it is Royal Albert Bone China, Made in England to Commemorate the Royal Visit 1959.  The word Canada is placed on the front under their picture. 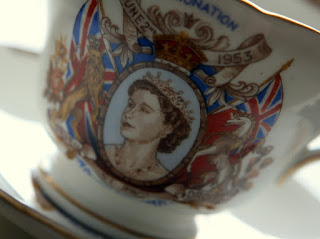 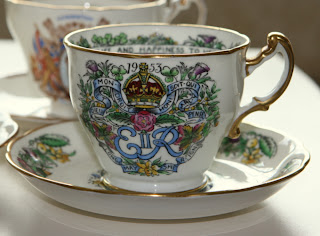 The bottom of this teacup has these words:  A Perpetual Coronation Memento Specially EIIR Designed by Hammersby; Bone China; Made in England 1953.  Inside the brim of the cup are the words:  Long life and happiness to her majesty.

This little silver spoon is special to me because it was given to me by a tea friend.  It features a crown-shaped point, along with an embossed profile of Queen Elizabeth II and the word Coronation and the year listed as 1953. 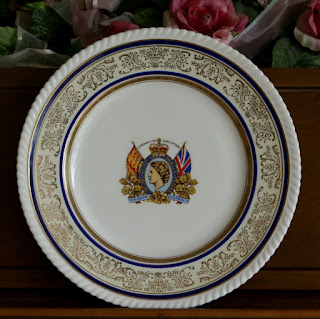 Lastly, is a coronation plate that was a Christmas gift from my father one year.  He found this plate in an antique shop while on a trip across Canada several years ago.  There are three markings on the back of the plate.  One is of a crown with the words Johnson Bros. Made in England and the words Old English above the crown.  Beside it is a seal with the Union Jack in the center and words that designate this as an "official design".  The third marking is a crown in gold and red with Queen Elizabeth's official royal cypher below it.  The words which surround the picture of Queen Elizabeth designate this as a Coronation June 2nd 1953 plate.
Posted by La Tea Dah at 5:19 PM