The Prince of Wales Feathers for Teacup Thursday 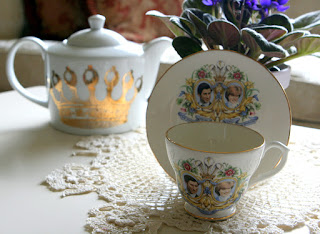 This morning I am joining Miss Spencer and her friends for Teacup Thursday.  The teacup and saucer I am sharing today is one that commemorates the marriage of the parents of Prince William. 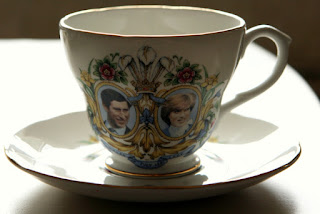 It is a Royal Southerland teacup that states on the base that it is fine bone china and made in England.  It features a picture of the Prince of Wales and Lady Diana Spencer.  It shares the date 29th July 1981 with their names on a ribbon below their pictures.  Beautiful flowers, including daffodils and Scottish thistle surround the scene and the feathers of the Prince of Wales top the shield.  Did you know that the Prince of Wales has his own feathers?  You can read about them here.  They are a heraldic badge that represent his position.  The words "I serve" are shown at the base of the crest, but are actually written in German. 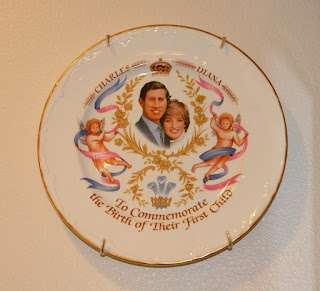 While I am sharing memorabilia related to Prince Charles and Princess Diana, I will show you two items that commemorate the birth of their first child, Prince William.  A plate, made in Canada and given to me by my father, hangs on my dining room wall.  A trinket container with a photo of Princess Diana and Prince Charles on the lid sits in my china closet among my Old Country Roses china. 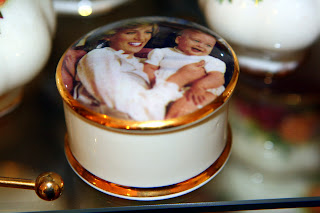 It seems just yesterday that we were celebrating the marriage of Charles and Diana.  Time passes by and now we celebrate the marriage of one of their children.
Posted by La Tea Dah at 9:07 AM