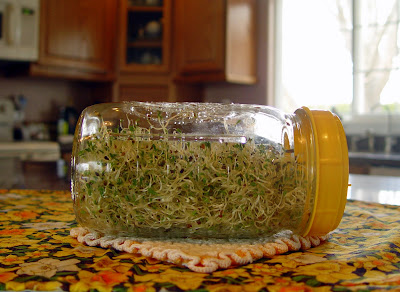 My kitchen has turned into a factory the past few weeks.  By late winter, I find myself craving really fresh foods.  Winter gardens, what there are of them in my locale, are not longer producing anything this time of year.  Produce is shipped in from states away.  It's still to chilly to plant outside.  That can't happen until the end of April.  So, instead I've gathered up a few sprouting supplies and have set up a little kitchen farm.  Have you ever sprouted alfalfa or radish sprouts?
When sis and I were six and seven, we had a next door neighbor who grew alfalfa sprouts in fairly abundant quantities.  They'd sprout them in pint sized cottage cheese cartons.  The sprouts would grow nearly to the top of the carton and looked like a soft, green lawn that was filled with flavor.  They were beautiful.  Next-door-neighbor sought the help of the neighborhood children to sell the sprouts.  We would go door to door, seeing if people would like to buy them for a dime or a quarter.  The sprouts sold themselves and sis and I felt quite honored that we'd been asked to help.
Ever since, growing kitchen sprouts has become a family tradition.  Although we don't grow them year around, a selection of seeds is always tucked away in the freezer, ready to grow when the mood strikes.  For weeks now, fresh and flavorful sprouts have been enjoyed in salads and sandwiches at our house.  Sprouts are high in antioxidants and enzymes.  And they contain nutrients like calcium, folic acid, magnesium, manganese, phosphorus, potassium, silicon, sodium, and zinc.   Some say that alfalfa sprouts are the only plant that supplies the full range of vitamins, from A to K (including B12).  And they contain chlorophyll, a blood-healing substance.
There's quite a variety of fancy gadgets and sprouting tools that can be purchased.  Over the years I have tried many of them, but the method I prefer is the most simple one.  Here's my method:
1.)  Place 1 - 2 tsp. of alfalfa (and/or radish) seeds in a quart jar.  Add water until seeds are just covered.  Lid and place in a dark cupboard.  Allow to sit overnight.
2.)  After 8 or 10 hours, using a mesh sieve, drain the water out of the seeds.  Rinse the seeds with fresh water. and drain  Place seeds back in jar.  Place lid back on the jar.  Seeds should be damp but not sitting in water.
3.)  Place back in cupboard and give them time to sprout.  Rinse the sprouts as per method above at least twice a day (I like to rinse them at least three times daily).
4.)  On day three or four, leave sprouted seeds in jar out on the counter top so they get some light.  Allow them to continue to grow.
5.)  On day five, place sprouts in a flat, low container after rinsing.  Cover with plastic wrap.  Let them sit in a well-lighted spot so that the chlorophyll develops (but out of direct sunlight, as you don't want them to cook).
6.)  When they have greened to your liking and small leaves have developed, place them in the refrigerator and store them until ready to use.  They are safe there up to a week (but they never last that long at our house because they are so YUMMY!).
Add them to salads of all sorts (cabbage salads, lettuce salads, or mixed with green onions and radishes to make a salad all their own).  They are great in sandwiches too.  Top whole grain bread with a bit of Veganaise.  Add sprouts and sprinkle with a dash of sea salt.  Delish!
Posted by La Tea Dah at 9:00 PM