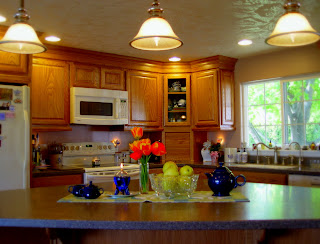 I've recently been looking for a copy of a book that shares short stories from the life of my great-great grandfather and my grandmother.  Great-grandfather is a man whom I have read about online, and of whom I have heard stories from my father, my aunt's, and my grandmother's sisters.  He must have been an amazing man because stories about him share of strength of character and fortitude.  He was a farmer by trade, but at sometime in his life, he converted from his Mennonite religion to a different evangelical one.  His focus became his strong belief in sharing God's word and the prophecy's that spoke of the nearness of end times, so in addition to farming, he became a traveling evangelist.  Life was hard in those days, and women often found life's events ones that caused illness and death.  As a result, great-grandfather ended up having three wives in his lifetime, and with each wife he had a separate group of children.  My grandmother, Katie, was one of four daughters born to the first wife.  I don't remember Grandma sharing too many stories about her youth, as I was young in her later years and we sometimes found communication between her German and my English difficult.  She was the type who never complained, so might not have shared of all her experiences anyway.  Her sisters, on the other hand, were women who didn't have any such scruples and in later years shared many stories of life as daughter's of the first wife.  I'm pretty sure these stories were shadowed by a little bit of bias, but I don't mean to discount them either.  I'm sure they are true, although slightly embellished with the perspective of their youth.  They tell stories of their step-mothers that are reminiscent of Cinderella.  The second wive's children were many and, according to Grandmother's sisters, very coddled.  The four older girls of the first wife were expected to work hard in areas that their younger half-siblings were not asked to partake.  Which brings me to the reason why there is a picture of my kitchen at the beginning of this post.  I cannot help but compare the modern luxuries of this day to the kitchen my grandmother and her sisters had to work in.  Their stove was heated with wood, and during the summer and autumn months the days were hot.  To keep the house as cool as possible, a summer kitchen was constructed a distance from the house.  It was the job of grandmother and her sisters to cook all the meals for harvesters and farm help.  The farmers in their Manitoba community would share the job of harvesting their crops by assisting one another.  It appears that great-grandfather's oldest daughters did all the cooking for the crews as the neighbor's harvested the crops of one another.  How interesting it was to hear, in later years, of women in their 70's and 80's sharing about the sweltering hot kitchen and of all the delicious foods they prepared there, and all completely from scratch.  These were not soup and sandwich meals, but rather the German dishes that were quite expected of them, as the farmers worked hard and must be fed accordingly.  Water had to be drawn, heated on the stove, and dishes washed by hand.  Baking and cooking on a wood stove during hot summer days must have been agonizing to them.  No wonder their perspective might be slightly biased!  I'd like to say that my dear grandmother ended up with a house that contained every modern convenience.  But it was not to be.  All of my memories of visiting Grandma include visits to a sweet little cottage that had electricity, but no running water, nor indoor bathroom.  And in the kitchen was huge wood cookstove!  Neat as a pin, Grandma was one to never complain.  Her house was always neat and clean and you'd never know that she lived without the conveniences of her neighbors.  She was a dear.  I am happy to say that in her adult years she embraced her half-siblings without prejudice and I grew up knowing all of them as great-aunt and great-uncle.  She was much loved by them all.
Posted by La Tea Dah at 5:59 AM