The Preparation and Service of Wu-Wo Tea Ceremony 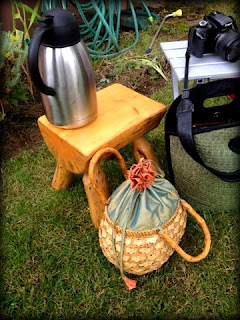 After a short instructional session for the Wu-Wo guests, we moved from Marilyn's garden house to the back yard. Members of the Wu-Wo group who meet monthly in Marilyn's community slowly started arriving. After a period of meeting and greeting, the tools for Wu-Wo started to be set up on the lawn. There were four guests at this event, and we were all provided with our own tea "kit" so we could participate along with the others. The six regular attendees were helpful and attentive as they assisted us in this ceremony. 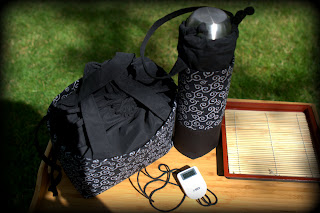 Wu-Wo is a style of tea ceremony. Its purpose is to provide an opportunity for sharing tea together in an environment that promotes acceptance, thoughtfulness of others, and gracious hospitality. It is a place where meaningful sharing takes place without discrimination to any religion, race, or creed. Acceptance and an unselfish approach are principles expressed through this style of tea service. It includes all generations, cultures, and kinds of people. It truly is diversity exemplified.

Dewey, who taught us about Wu-Wo tea ceremony commented by saying: I love doing Wu-Wo because it is all about community, nature, and being present with the tea. I think the word "ceremony" makes one think it is very structured, and although there is structure to it, it is also about the acceptance of differences. In the end, the only thing that matters is that you brew, drink, and enjoy the tea however it manifests. 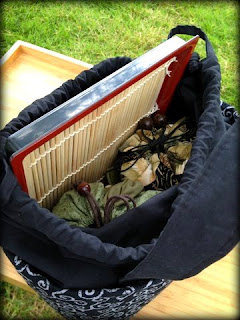 Seating is random and circular.  Ours was established by drawing a number and then finding the matching number on a card in the yard. This illustrates the equality of each guest with another. 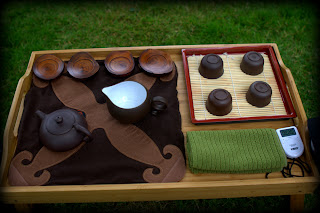 Once seated, we were given time to open up our tea "kits" and set up our tea tray. 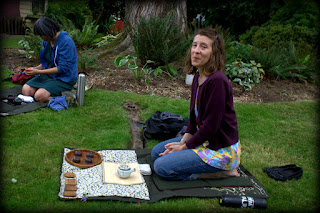 Those who regularly attend the Wu-Wo tea ceremony were generous and helpful in assisting the rest of us. Much kindness and cooperation were exemplified. Some of our questions might have seemed "dumb" or "silly", but we asked them and were given answers graciously and without a hint of censure. Guests were made to feel comfortable and at ease. 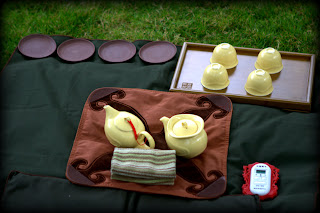 Once everyone was set up, we were encourage to walk around the circle and examine the tea settings of each participant. It was an enjoyable moment, as each setting was unique and expressed the personality of the individual. Although I didn't remember to take pictures specifically of the flower arrangements, I was pleased to see that each of the regulars had a small floral bouquet or stem of flowers somewhere in their setting. The flowers were not only  an element of self-expression of the participant, but brought a piece of life and nature to the still-life scene. 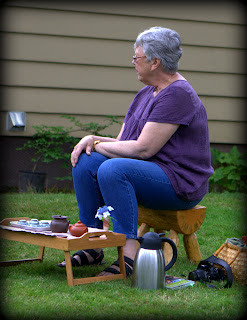 Marilyn's floral bouquet can be seen in this picture. She's all set up and ready to begin; quietly chatting with Linda who was seated beside her. She may have been sharing about Grand Master Tsai, Rong Tsang of Taiwan who modified the ancient ritual of Gong-Fu tea brewing in 1989 to create a ceremony that allows many people to participate in the brewing and service of tea in a casual and selfless setting. 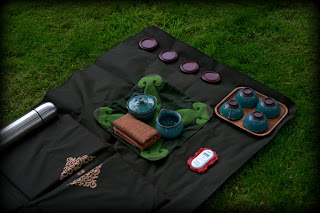 After a period of visiting, viewing, and photographing, we returned to our own spaces to start the brewing process. From the moment brewing began until the end of the ceremony, everything was done in silence. Each of us had a thermos of hot water which we poured into our teapots. Each teapot had been pre-packed with its own unique kind of green tea. A timer was given at each cover. We used it to time our individual tea brewing and then poured the brewed tea into a small pouring vessel. From there we poured four cups of tea and placed them on a tray. Then each participant got up and placed one cup of tea on a designated individual tray or coaster on the mat of the three individuals to their left. The last cup of tea was taken back to the servers own mat and was set beside the tea cups that were set there by those on their right. This process was repeated three times, from brewing (the same tea leaves) to serving. The tasting process was exceptionally interesting and appealing. Each tea differed by type and by brew. No matter how perfectly (or imperfectly) the tea was brewed, acceptance and appreciation was the encouraged result. Essentially, there was no "bad" tea. Just as individuals were accepted with all their diversity, so was each cup of tea! 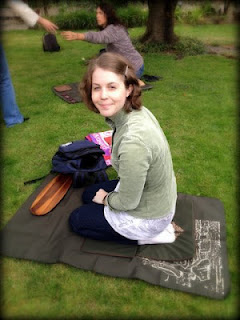 This was the first time Sally and I participated in a Wu-Wo tea ceremony. Later, when Sally returned home, she discovered that a friend of hers who has been teaching English in Korea for the past two years has participated in this ceremony many times. He asked Sally how many brews our group steeped, and he then mentioned that often they brewed fifteen or more times in one sitting. And that the process took a very long time! It is common that multiple rounds of tea are brewed from the same tea leaves, although I wonder if Grand Master Tsai Rong, Tsang of Taiwan ever expected fifteen brews in one setting! 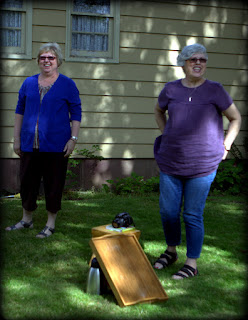 After the tea ceremony, participants gathered up their cups, bowed to one another, and repacked their tea "kits". Conversation resumed and was again encouraged. In this picture, Linda and Marilyn have packed up and are ready to move along to the next phase of this event. I love how they are both laughing and smiling. I especially enjoy this photo of Marilyn because it looks like she is preparing to dance! She is a friend who always encourages the expression of joy! It's one of her traits that I especially appreciate. The Wu-Wo experience of sharing and acceptance cannot help but bring joy to the participant.

To be continued! Check back again soon.
Posted by La Tea Dah at 10:43 PM