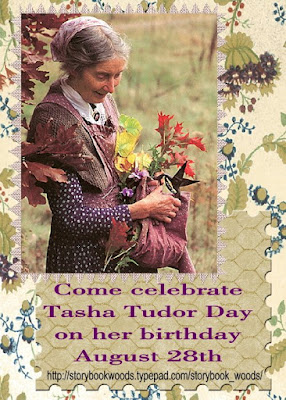 Today Clarice at Storybook Woods and some of her friends have implemented Tasha Tudor Day in commemoration of Miss Tudor's birthday. Each year for the past four, Clarice has shared memories of how this special woman touched her life and those of her friends.

Be sure to stop by Clarice's blog so you can participate in this special event! Here she shares pictures of garments that remind her of Tasha. And here is her post today which celebrates Tasha's legacy.

Happy Birthday to the memory of Tasha Tudor! 
Beloved Tasha Tudor, author and illustrator of many books and gardener extraordinaire, passed away at her home in Marlboro, Vermont on July 18, 2008. She was born in Boston, Massachusetts on August 28, 1915 and was named after her father, Starling Burgess. But her father, who enjoyed Tolstoy's War and Peacepreferred to call her Natasha after a character in the book. Her mother's friends would sometimes refer to her as Rosamund Tudor's daughter. Tasha liked the sound of the name Tasha Tudor, and eventually had her name legally changed to reflect this preference. Ms. Tudor received many awards and honors for her exceptional contribution to literature. A Caldecott Honor was given for her work for Mother Goose in 1945 and again in 1957 for the book 1 is One. She also received the Regina Medal in 1971 for her contributions to children's literature. Her prose was always simple and captivating, frequently including rhyming text. Enchanting illustrations were detailed and realistic in soft colors that seemed to fade away onto the page. She was known for her love of nature and flowers, birds, and other charming animals were frequently featured in her art. Some of the books she wrote and illustrated are: Tasha Tudor was one of the great artists of the 20th century. Her love for illustrating New England nostalgia and sentimental illustrations that made one think of a bygone era. She lived her life as she dreamed, simply and sustainably, preferring the old-fashioned in both lifestyle and dress. For 92 years the world has been blessed by her presence and contribution to American culture, literature, and art. Although she is gone from us now, her legacy and spirit will live on through the work she so fluently contributed to all. The photographs today are taken from one of my favorite books: Tasha Tudor's Garden by Tovah Martin and Richard W. Brown.
Posted by La Tea Dah at 12:32 AM