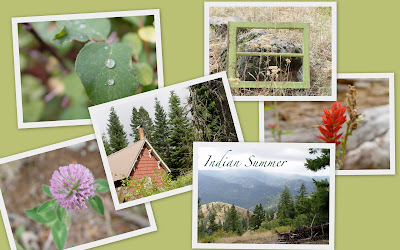 It's a beautiful time of year. Although it is technically a few weeks too soon to declare this officially "Indian Summer", these late days of summer are slowly fading into the magical expression of early autumn. Indian summer is a term used informally to describe the sunny and warm weather of autumn in the northern hemisphere. It requires warm days (usually about 70 degrees F) and pleasant skies. It's the time when the roses start to thrive again after summer's heat and when tomatoes are just coming into themselves on the vine. It's when the leaves start to turn brilliant and glorious colors on the trees. Metaphorically, this term refers to a late blooming of something after it has formerly lost its relevance. It's a revival of the early days of summer when gardens thrived and pleasant skies and gentle weather made it fun to be outside. Although Indian summer generally is noted as a period in October and November (before the first snowfall), it arrives earlier on the mountain, as cold nights bring autumn sooner there. Indian summer; a pleasant time to spend in nature, sharing with those you love. I think it's time to plan a campfire picnic around the fire pit, don't you? What are your plans for Indian summer?
Posted by La Tea Dah at 12:02 AM