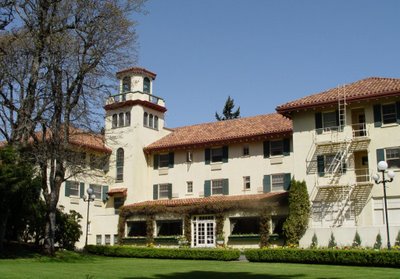 The Columbia Gorge Hotel was built in 1904 by a pioneer to Hood River, Oregon. In those days, steamers would naviate the waters of the Columbia River below on their cruise fom the Cascade Mountains to The Dalles. Steamer captains would alert the hotel personnel of the number of guests on board by sounding their whistle one time for each guest. Maids would then quickly make up the needed number of beds.
Simon Benson purchased the hotel in 1920, desiring to create an opulent hotel for travelers. Because the hotel was near the end of the famous and scenic Columbia Gorge Scenic Highway, it was his dream to create a place of beauty and elegance that would attract guests to his lodging and dining establishment. Italian stone masons were hired to embellish the already stately hotel.
The hotel gained popularity as a place for the rich and famous. Presidents Roosevelt and Coolidge lodged there, as did the actresses Myrna Loy, Jane Powell, and Rudolph Valentino. The lounge is named the Valentino Room to this day.
The depression and the war years took it's toll on the hotel, but it was restored to it's former glory in the early 1980's and now stands proudly atop a bluff overlooking the mighty Columbia River. Guests are greeted and treated by old standards of excellence, warmth, and elegance. This is a destination hotel that has a reputation for quality and service.