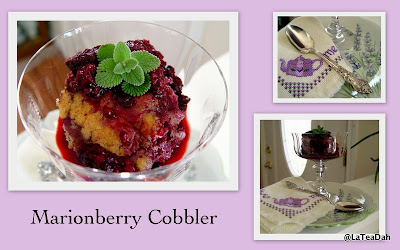 Marionberries were developed by scientists at Oregon State University.  They are a spectacular blackberry with a glossy, black appearance that turns to a deep, dark purple when frozen and thawed.  The Marionberry is tart with elements of sweetness.  It is larger, sweeter, and juicier than most other blackberries.
Using the same filling ingredients and proportions as shared in a post for Marionberry Crisp, I decided to make a Marionberry cobbler.  It is interesting to taste the difference between the two desserts.  Although they are both similar in ingredients, the flavor and presentation of each is unique.  A cobbler is simply made by choosing your favorite baking powder biscuit recipe and adding sweetener and a dash or two of cinnamon.
For my cobbler, I chose a gluten-free biscuit mix that required the addition of oil and water.  After adding stevia powder to make it sweeter, I added cinnamon and then worked the dough, forming it into a soft ball.  Small biscuits, formed by hand, were placed on top of the Marionberry mixture until the top was covered.  It was baked at 350 degrees F. for 30 - 25 minutes (until browned).  When done, remove from oven and allow to cool.  The dough mixture on the top will absorb the extra moisture in the berries, creating a delicious and tasty dessert!
Posted by La Tea Dah at 6:18 PM