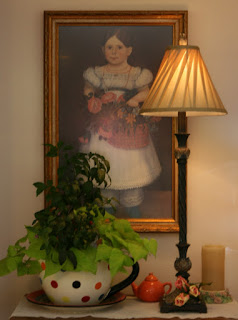 I remember the first time I ever actually noticed an ornamental sweet potato vine.  I was with my mother at a plant nursery and gift shop called "My Grandmother's Garden".  It was during the time that the Tuscan look was just becoming popular, and the nursery had large urns filled with plants in beautiful arrangements.  The plants varied from spiked reds to leafy greens.  But it was the bright lime-colored sweet potato vines that caught my eye!  They were gorgeous, classy, and vibrant!  When I got home again I searched them out and placed one in every outdoor potted garden I owned! 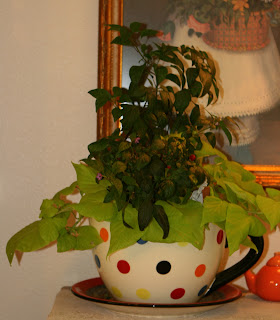 Again, last summer I planted a sweet potato vine along with a purple hot pepper plant in this large teacup planter.  It did very well in the summer's heat.  In the past I have always enjoyed them until the first frost and then let them go.  But last autumn I decided to see how it would grow inside as a house plant.  What a pleasant surprise!  It has thrived in the house.  It's grown so much that I have had to prune it back and wind its long tendrils around the teacup to keep them from dragging on the floor.  How I have enjoyed the vibrant lime green during winter's dreary days. 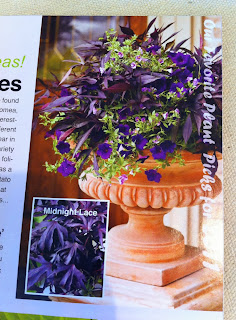 Recently, a magazine from a local nursery arrived in my mailbox, and it featured an article about this pretty vine.  Sweet potato vines are actually called Ipomeas and come in at least 21 different varieties.  They call this a "tropical looking trailer".  How true!  While the foliage is growing above ground, below the soil is a sweet potato that grows larger and larger along with the vine.  They look interesting and are edible, but probably not as delicious as sweet potatoes grown grown for culinary purposes.  The Ipomea in the urn above is called "Midnight Lace" and I think it looks beautiful with trailing petunias and million bells. 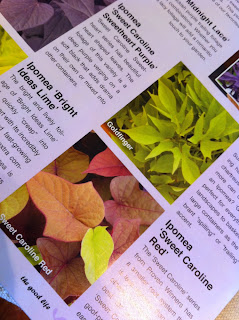 Ornamental sweet potato vines come in a variety of shapes, sizes, and colors.  The Ipomea "Goldfinger" in the top picture loves the sun and is known for how well it "trails" or "spills" out of baskets and planters.  It's foliage is a vibrant chartreuse and it has three parts to it's leaves that look like long, green fingers!  The Ipomea "Sweet Caroline Red" is shown in the lower portion of the above photo.  This variety has leaf colors that meld from vibrant green to a bright red, making it a pretty choice for planting in garden pots.  It has a smaller root system than some of the Ipomea, so it is suggested that it be used mostly for potted gardens rather than regular flower or shrub beds. 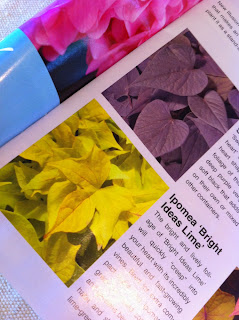 The Ipomea "Sweet Caroline Sweetheart Purple" shown in the upper part of this photo has beautiful, purple leaves that are heart-shaped.  Sometimes the leaves verge on a soft black color, which really adds drama and zest to a plant bouquet.  The Ipomea "Bright Ideas Lime" is probably one of the most popular of all because of its vibrant, lime-green color.  It has been cultivated to be compact and fast growing, making it ever popular for containers containing mixed gardens.  It adds variety and energy to any garden pot. 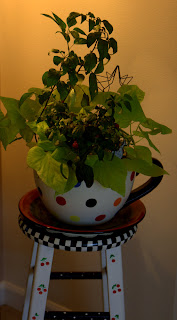 So, take a look at your garden center if you want to have some fun "creating" gardens with this interesting trailing plant.  I think you'll enjoy it, as have I!


[The last picture was taken during the winter before any new growth occurred.]
Posted by La Tea Dah at 1:00 PM