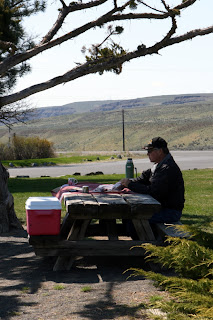 According to our local newspaper, this has been the third coldest April on record.  Last night the wind machines in the neighbor's apple orchard were working away because of another very cold night.  Even though we've had some lovely, sunny days --- it is still cold!  Ever eager to enjoy the great outdoors, even on chilly days, opportunities for long drives and picnics are created.  With snow still in the mountains, we've had to look for alternatives to forest adventures. 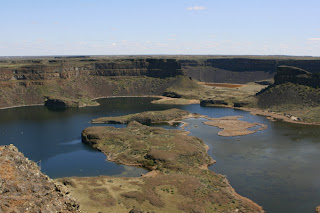 This day we ended up at a place called Dry Falls.  From the top of a three and a half mile-long precipice we could observe tiny dots of fishing boats in the blue lake 400 feet below.  Dry Falls is thought to be the greatest known waterfall that ever existed!  It is ten times the size of Niagara falls.  According to geologists, water flowed at over 65 miles an hour over this precipice, a rate which is ten times the current of all the world's rivers combined. 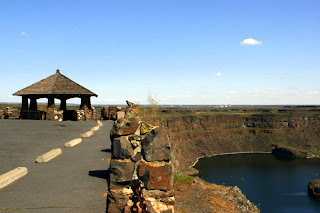 What a sight that would be to behold!  But the ice age activity is past, leaving only clues as to what went before.  Barren, rocky landscape for miles around share the story of ice age mysteries that geologists work now as detectives to solve.  There is beauty in all of God's creation, even in the dry, barren remoteness of central Washington.
Posted by La Tea Dah at 8:41 AM