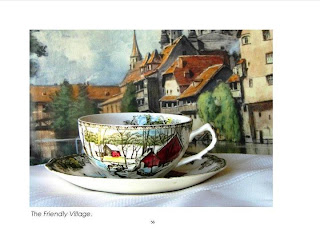 If you've been keeping up with Gracious Hospitality, you know that there's a give-away going on. The book Teacup Art....and Reflections by Joyce Wilkens is being given away to the one who's name is drawn. If you'd like to enter, click here and leave a comment. Joyce's book is filled with many unique teacups from her collection. It was difficult to choose just one for today's post. After leafing through the books pages, I finally chose a page that she's titled after the teacup shown which is "The Friendly Village" collection. It reminds me of a portion of an email that Aunt Marcella sent to me just a few days ago. Although she doesn't speak of teacups in her email, I really enjoyed her description of a village that could very well look like the one illustrated on this page. Please pour yourself a cup of tea and read along with me. Savor the words Aunt Marcella wrote forty-three years ago about a trip she and Uncle Mike took to the quaint village of Gradiska in then-communist Yugoslavia. She wrote about her visit to the village market and countryside after an anxiety-filled night in a dusty old room in a noisy hotel without locks on the doors.

It seemed the roar of Saturday night's revelry (noisy, drunken brawlers in the streets that expanded into our quaint hotel) only barely exceeded the roar of Sunday morning's market carts, and the latter took up just about where the former left off.  Those rubber-tire-less wagons came wheeling into town loaded with produce and people, with a rumbling calculated to wake the dead, hurrying to nab a prime spot on the market place on which to sell their home grown goods. Peeking out the grimy window, we nervously accessed the risks in this new invasion.  Wearily, we gave ourselves up to it, got dressed and hit the street with the marketers about 6 am, or just in time for a good frost bite. Enter here a gnarled little old lady-hen, who took me under her kindly wing and together we clucked about the booths, watching the market grow from an early dawn trickle to a rushing river by 9 a.m.  She introduced me to her sister-in-law, who was presiding over her large basin of juicy, homemade sauerkraut.  I also met lots of other farmer ladies dressed in long skirts, aprons, and head scarves.  Clothes seemed to come in two colors; dark and darker, and life in 2 speeds; slow, and as the English say, dead slow.  We finally found a man who was willing to take our picture together near the sauerkraut.  No easy task, since the men here knew nothing about cameras and simply backed off in panic when approached.  Mike, who exercises every day, come riots or wagons, even when traveling, left the market to me, and started south on a 20 mile jogging workout, headed for Sarajevo.This was to take him about 2 and a half hours, and after settling on route, time, and meeting place, I had spare time enough to kick up some excitement among the wagons.  Good grief, hadn't I had enough of that all through the long night? No trouble this time, actually, just lots of fun, as I helped myself to liberal servings of that local market.  Mike gobbled the unique cultural scene with his eyes, while jogging slowly south to the rendezvous spot.  Later as I started down the Sarajevo road to catch that runner, I also wolfed large and nearly indigestible portions of that same 19th century scenery.  My excitement had reached a fever pitch by the time I caught him and I think his had too.  "Sheep, oxen, wells, mosques, geese, drying  red paprika's, Turks, thatched roofs..........."  It all came tumbling out at once.  What a country, such villages, what farmyards, what rustic landscapes with old ladies minding the geese by a pond with staff in hand.  Having less than two years in these heady foreign climes, we were pop-eyed, excited and excitable "babes in toy land", or perhaps children in Mother Goose land. We couldn't have known it then, but much was yet to come.  In succeeding revisits, Yugoslavia unfolded its magnificent entirety to us, converting that early scepticism into a robust pro Yugoslavian friendship. She quietly wove her lovely silken web around us with snow-capped mountains, superb Adriatic coastline, green fields, blue lakes, Renaissance bell towers, fields of storks, forgotten mountain valleys sauntering along in the 17th century, and a warm and lovely people. Yep, we're captured and this Slavic Sunday was a startling, and implausible opening to a very long lasting love affair.

Don't forget to enter the drawing! Click here for instructions to enter!
Posted by La Tea Dah at 3:00 AM