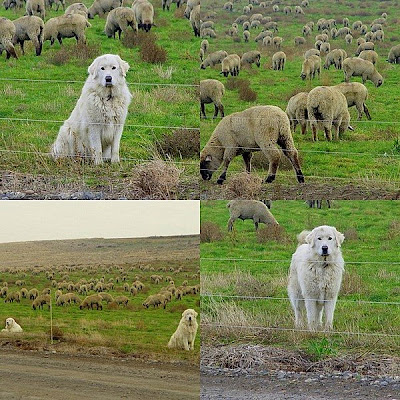 Observing nature as the seasons change in our neighborhood is always interesting and informative. I enjoy learning new things related to the flow of life, and seeing them in action is even better. Throughout the summer months, crops have grown in fields along the highway. Animal life has been limited to an occasional coyote, wild turkeys and geese, or deer feeding in fields. But after harvest the wild animals have had a little competition for space and attention.

On a Sunday drive this week we passed a cornfield newly cut. Where stubby corn stalks replaced the tall corn plants, a single-strand electric fence had been installed and cattle now dotted the field, greatly enjoying a feeding fest. They were easy to see because of their large size and dark color. Down the road a few more miles, sheep were more camouflaged, looking like fuffy little lumps of sagebrush dotting a grassy field. A second glance revealed hundreds and hundreds of sheep! They were tended to a little more carefully than the cattle, having a three-strand impromptu fence and guards to protect them from harm. A sheep-herders trailer was set to the back at the top of the hill, but looked empty as the task of protecting and caring for all these sheep was assigned to two friendly Great Pyrenees dogs. This large breed of dog is known as the livestock guardian dog and was initially bred to assist shepherds in the Pyrenees region of southern France and northern Spain. These dogs are fearless, protecting their charges from coyotes, wolves, and bears. Our cousin, Della, who has a flock of goats at her ranch in Arizona finds that her Great Pyernees also protect her flock from the cougars who live in nearby hillsides. She trusts them implicitly.

Although these dogs prefer to live outside, they crave human attention and are devoted pets. They are companionable and delight in human company. This was illustrated to us when we stopped by the side of the road to take a few pictures of their charges. Both dogs were at the far end of the field, atop a small hill. Instead of watching us from afar, they came as close as they could and then looked at us with tails wagging and friendly expressions on their faces. Even with the company of all those sheep, they seemed to crave our attention. When it came time to leave, they 'chased' our car down the road, as far as they could go, staying within the confines of their fenced space. It would take nothing for them to pass under that simple three-strand fence, but they remained devoted to their task, and even unaided by human contact, they stuck with their job of being keepers of the sheep, extraordinaire. Don't you just want to hug them?

"He will stand and shepherd his flock in the strength of the Lord, in the majesty of the name of the Lord his God. And they will live securely, for then his greatness will reach to the ends of the earth. And he will be their peace." Micah 5: 4 - 5